Posted on 20 June 2020 by Sofia Forchieri
in: Categories: Books.

Special Issue of Continuum: ‘The Perpetrator of Crimes Against Humanity in Global Documentary Film’ 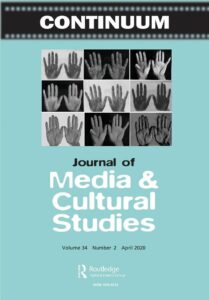 This special issue of Continuum: Journal of Media & Cultural Studies sets out to explore how the figure of the perpetrator of political violence is represented in recent documentary film (2000–2019) across a broad variety of cultural and political contexts.

Fernando Canet is associate professor in film and media studies at the Fine Arts College (Polytechnic University of Valencia, Spain). He has been a visiting research fellow at the Goldsmiths College (University of London), at New York University and at the University of Kent. He is the author of two books, co-author of another book about film narrative, and co-editor of three books.