Posted on 12 June 2020 by Sofia Forchieri
in: Categories: Books.

Picturing Genocide in the Independent State of Croatia: Atrocity Images and the Contested Memory of the Second World War in the Balkans 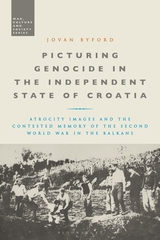 Picturing Genocide in the Independent State of Croatia examines the role which atrocity photographs played, and continue to play, in shaping the public memory of the Second World War in the countries of the former Yugoslavia. Focusing on visual representations of one of the most controversial and politically divisive episodes of the war — genocidal violence perpetrated against Serbs, Jews, and Roma by the pro-Nazi Ustasha regime in the Independent State of Croatia (1941-1945) — the book examines the origins, history and legacy of violent images.

Notably, this book pays special attention to the politics of the atrocity photograph. It explores how images were strategically and selectively mobilized at different times, and by different memory communities and stakeholders, to do different things: justify retribution against political opponents in the immediate aftermath of the war, sustain the discourses of national unity on which socialist Yugoslavia was founded, or, in the post-communist era, prop-up different nationalist agendas, and ‘frame’ the Yugoslav wars of the 1990s.

In exploring this hitherto neglected aspect of Yugoslav history and visual culture, Jovan Byford sheds important light on the intricate nexus of political, cultural and psychological factors which account for the enduring power of atrocity images to shape the collective memory of mass violence.

Jovan Byford is Senior Lecturer in Psychology at The Open University, UK.