Posted on 26 November 2019 by Karlijn Herforth
in: Categories: Books.

The Unspoken as Heritage: The Armenian Genocide and Its Unaccounted Lives 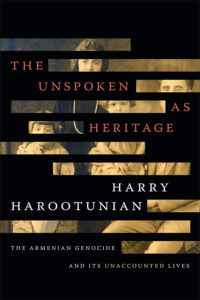 In the 1910s historian Harry Harootunian’s parents Ohannes and Vehanush escaped the mass slaughter of the Armenian genocide, making their way to France, where they first met, before settling in suburban Detroit. Although his parents rarely spoke of their families and the horrors they survived, the genocide and their parents’ silence about it was a permanent backdrop to the Harootunian children’s upbringing. In The Unspoken as Heritage Harootunian—for the first time in his distinguished career—turns to his personal life and family heritage to explore the genocide’s multigenerational afterlives that remain at the heart of the Armenian diaspora. Drawing on novels, anecdotes, and reports, Harootunian presents a composite sketch of the everyday life of his parents, from their childhood in East Anatolia to the difficulty of making new lives in the United States. A meditation on loss, inheritance, and survival—in which Harootunian attempts to come to terms with a history that is just beyond his reach—The Unspoken as Heritage demonstrates how the genocidal past never leaves the present, even in its silence.

Harry Harootunian is Max Palevsky Professor of History Emeritus at the University of Chicago; professor emeritus of East Asian studies at New York University; and the author of numerous books, most recently, Uneven Moments: Reflections on Japan’s Modern History.