By Lisa A. Costello. 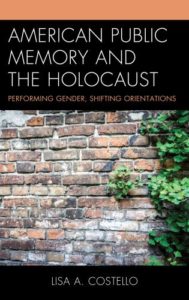 The recent rise of global antisemitism, Holocaust denial, and American white nationalism has created a dangerous challenge to Holocaust public memory on an unprecedented scale. This book is a timely exploration of the ways in which next-generation Holocaust survivors combine old and new media to bring newer generations of audiences into active engagement with Holocaust histories. Readers have been socialized to expect memorialization artifacts about the Holocaust to come in the form of diaries, memoirs, photos, or documentaries in which gender is often absent or marginalized. This book shows a complex process of remembering the past that can positively shift our orientations toward others. Using gender, performance, and rhetoric as a frame, Lisa Costello questions public memory as gender neutral while showing how new forms of memorialization like digital archives, YouTube posts, hybrid memoirs, and small films build emotional connections that bring us closer to the past.

Lisa Costello is associate professor of writing and linguistics and director of the Women’s, Gender, and Sexuality Studies Program at Georgia Southern University.