Posted on 2 September 2019 by Karlijn Herforth
in: Categories: Books.

Genocide and Mass Violence in Asia 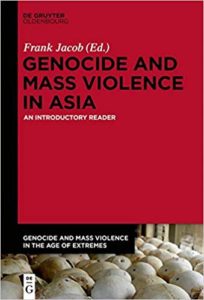 In Asia the “Age of Extremes” witnessed many forms of mass violence and genocide, related to the rise and fall of the Japanese Empire, the proxy wars of the Cold War, and the anti-colonial nation building processes that often led to new conflicts and civil wars. The present volume is considered an introductory reader that deals with different forms of mass violence and genocide in Asia, discusses the perspectives of victims and perpetrators alike.

Frank Jacob holds a PhD in Japanese Studies and is Professor of Global History at Nord University. He has published on war crimes in Asia, such as his recent co-written publications Japanese War Crimes during World War II : Atrocity and the Psychology of Collective Violence (Praeger 2018) and The Russo-Japanese War and its Shaping of the Twentieth Century (Routledge 2018).